Large cat breeds often resemble their big-cat jungle cousins. For example, the Bengal cat looks a lot like a Bengal tiger. But do not worry, they are fully domesticated house cats.

If your mantra is the bigger the better, and you love big and cuddly cats these five large cat breeds are tailor-made for you.

Imagine sharing the space with a cat as large as a leopard. The thing you have to remember is that most large breeds do not reach their full size until they are four or five years old.

Yes, that means even though they are large enough during the teenage years, they will be even bigger. With that in mind, here are five cat breeds perfect for those who want big cats.

If you want to have a lion as a pet, but you cannot get one, the closest thing you can get is a Maine Coon cat. The largest domestic cat breed, they can weigh up to 18 pounds on average, with some going up to 25 pounds easily.

For a cat, the Maine coon is a huge animal. They are native to America and were first discovered in the state of Maine, which is why they carry that name. Maine Coon cats come in 75 different color combinations, and because of their color, they are often known as American Longhair cat.

Unique in so many ways, the Maine coon cat is the only show cat breed originating in the United States. As with many large cat breeds, they are prone to heart diseases because of their size.

Highly adaptable to any situation, the Maine Coon cat can easily live in chillier environments. Maine Coon cats have long, shaggy and multi-layered fur and large paws. This helps them walk on the snow, and because of their furry ears and bushy tails, they can wrap their body for extra warmth.

Known as dogs of the cat world, they tend to be highly social and like human interaction. Maine coon cats are friendly, loyal, and playful. They get along with children, and other pets, and can even play fetch or walk on a leash. Another aspect that is unique regarding Maine Coon cats is that they enjoy the water, and have water-resistant fur.

As you can imagine, the Siberian is Russia’s national cat. For more than 1,000 years, this cat has been around and hailed as the largest feline breed in existence. That was before the Maine Coon cat took that title away.

Male Siberian cats reach between 15 and 20 pounds but can go up to 25 pounds, while females reach a weight between 12 and 15 pounds. However, it is worth mentioning that the Siberian does not grow overnight. Instead, they grow steadily during its first five years of life.

Siberian cats are very friendly and adventurous. They do well with people, other cats, and can even function with a dog in the home. Fearless, and calm at the same time, they love to be close to family members. Unlike most cats, they do not meow. Instead, Siberians are more likely to chirp or trill.

Fun fact: Siberian cats can exhibit dog-like behavior. For example, it is not uncommon for Siberians to greet people at the door, and come when called.

They have low levels of Fel D1 protein, meaning people who are allergic to cats can snuggle up with a Siberian. But all that comes with a cost, with an average Siberian kitten selling for $1300 to $1600.

Another cat that is native to a certain country, the Burmese originated in Thailand. The cat has its roots from the present Thai-Burma border. They are more a medium size than a large cat, but they can easily grow up to 15 pounds, which is considered large enough. And while they are not as large as other large cat breeds on the list, the Burmese is quite muscular. They feel heavy for their size when held.

They tend to be tall, thin, and smooshy-faced. Burmese cats are extremely curious, and they will be all over you and around the house, looking for something to play with.

If you are not home for a long period, the Burmese cat is not for you. They crave human contact, and when left alone for long periods, they will become withdrawn. In other words, they are the most affectionate cat in the feline world.

Very social cats, they thrive on the companionship of all family members and other pets. If you are not home for a long period, you should either avoid a Burmese or get a friend for the cat.

One downside of the Burmese cat is that they are very vocal. Same like Siamese, they want to express their opinion and love to communicate, and they do that by meowing.

If you want to a fierce touch to your home, the Savannah is the cat for you. This breed is a hybrid kitty, part domestic, and part African wild cat. They can weigh up to 20 pounds, but they are considered large breed more because of their height. For example, it is not unusual for a Savannah cat to reach up to 15 or 17 inches when they are fully grown.

They are friendly and great companion cats, but they are not lapping cats. Being they have wildlife genetics, the Savannah cat is more about adventure and action, where she can showcase her athletic ability and physique.

People often marvel at their exotic appearance, with a spotted coat, large tall ears, hooded eyes, and bold markings. Same as with the Burmese, if you are not home for long periods of time, this large breed is not for you. You should choose a Savannah if you want a close and interactive relationship with your feline friend.

Fun fact: Two Savannahs have held the record for Tallest Domestic Cat. Trouble measured 19 inches in 2013 and was surpassed by Arcturus in 2017, who stood just over 19 inches. 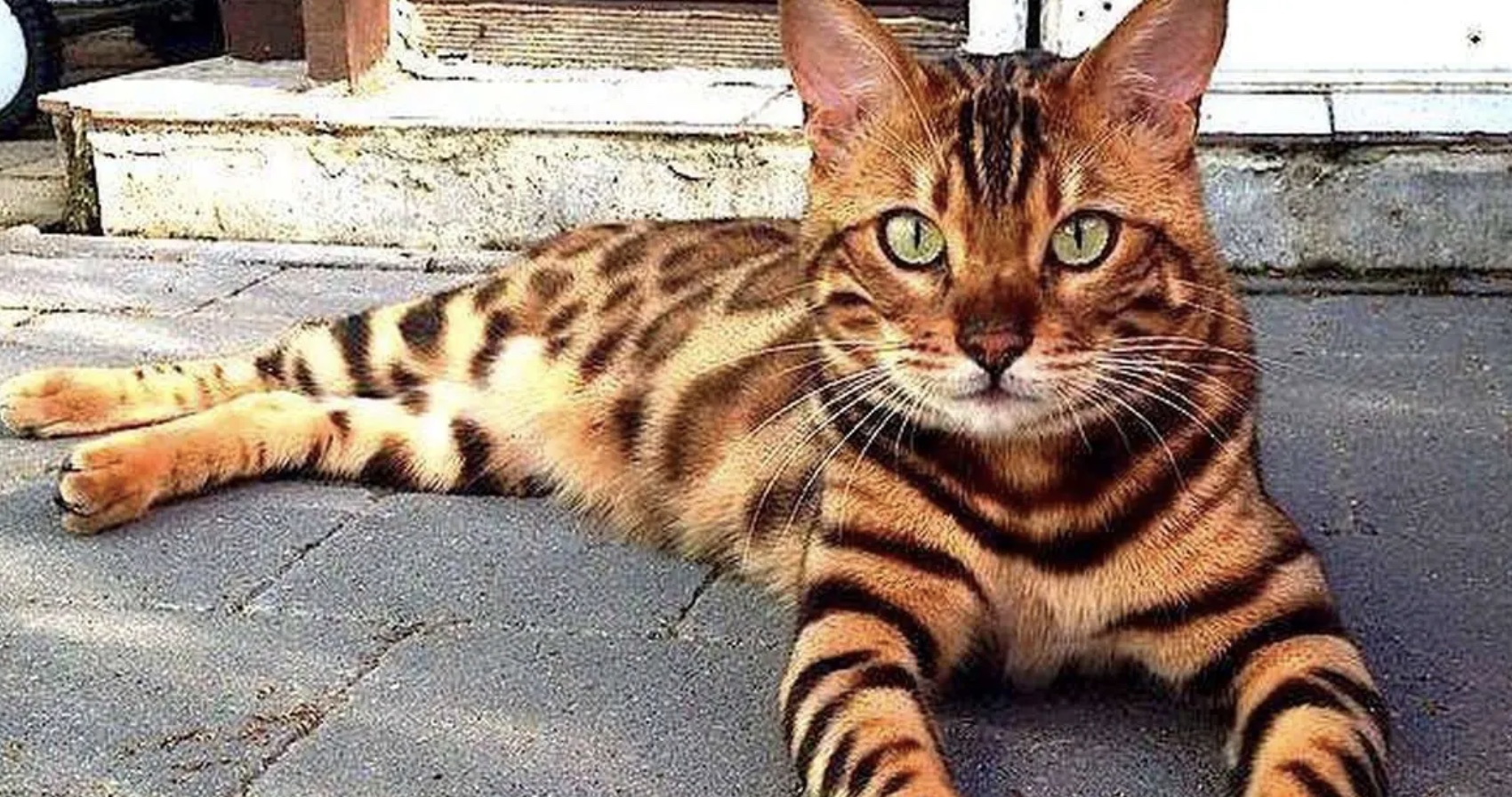 Here is a cat that looks just like a tiger. Male cats are larger than females, with a size between 10 and 15 pounds, while the female reaches an average size between 8 and 10 pounds. This breed was created as a hybrid between domestic cats and the Asian Leopard cat.

Known as extremely intelligent and interactive, Bengals get along with other animals. Fun fact: Bengals can be clicker trained just like dogs. Their most favorite activity is climbing around the house, so make sure there is a lot of vertical space for your cat to play around.

The Bengal cat is best suited for a home with older children. Small children tend to be obsessive with cats, and they do not let them run around. The Bengal enjoys playing, but they always want to have an escape route.

Many people assume the Bengal is hard and difficult to handle, but the opposite is true. However, they are not a lap cat. They are known to purr a lot, as it is a way for communication. They also make grumbling and chattering sounds when they are purring.

If you are interested in contributing an article to GrabLists, please reach out to our editorial team at editorial [at] grablists.com.